Watch Your Back: States with the Most Tailgating Violations

Watch Your Back: States with the Most Tailgating Violations 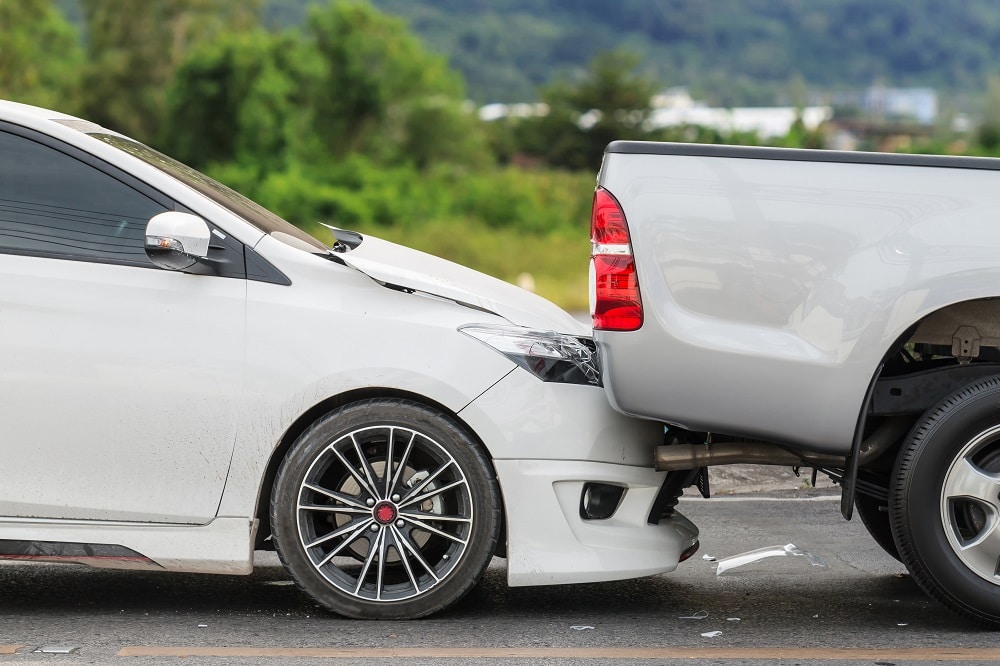 Tailgating is one of the most annoying driving behaviors. These are the states whose drivers are most guilty of following too closely.

It is a beautiful day outside, and, as the cliche goes, the sun is shining and the birds are chirping. You’re on your way to do something outdoors, until all of a sudden your day is ruined by tailgating. Not the kind you do before a football game—that isn’t very likely to ruin your day, unless you don’t care for football—but the more dangerous kind that occurs on the roads.

As you drive down the street, you brake a little suddenly to avoid a speed bump. Unfortunately, the person behind you is following you a little too closely and can’t avoid the rear end of your car. Their tailgating has just caused an accident, and it’s a costly collision for both parties involved. Your car is out of commission, while the other driver is fined for tailgating, meaning their driving record takes a hit, and their insurance rates go up.

With that in mind, the research team at Insurify, an auto insurance quotes comparison site, ran the numbers to find which states are guilty of the most tailgating violations. 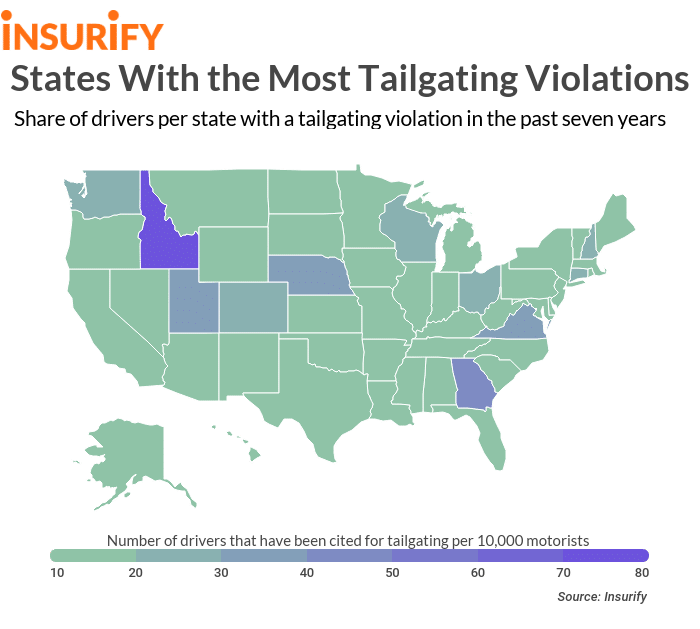 To assess which states have the most tailgaters, Insurify, an auto insurance quotes comparison website, pulled data from its database of over 1.6 million car insurance applications. To apply, drivers input personal and vehicle information, as well as details about their driving history, including whether or not they have been cited for tailgating in the past seven years. Researchers then compared the number of drivers with a tailgating violation against the total number of drivers in a state to identify which states had the highest proportion of tailgaters. Data about the rate of seatbelt usage by state is also included, which comes from a 2017 study from the NHTSA. Additionally, the number of vehicle-related deaths per 100,000 people, as well as data on the percentage of crashes with multiple vehicles, come from data compiled for the year 2017 by the Insurance Institute for Highway Safety.

The Centennial State is more known for its beautiful mountains and excellent skiing than bad driving, but it boasts the 10th-worst rate of tailgaters out of the 50 states. Interestingly, Colorado does have the highest percentage of multiple-vehicle crashes out of the 10 states discussed here, and is tied for fifth-highest nationally. The state also has relatively more vehicle-related deaths than the national average.

New Hampshire slots it at the number nine spot on the list, but tailgating isn’t the only problem it has to work on. Just 67.6 percent of residents wear seatbelts when driving, a rate which ranks worst in the country. That low number ranks a full 22.1 percent below the national average. Despite this, the New England state still sees relatively few fatalities. Their rate of vehicle-related deaths is the 7th lowest in the country.

Ohio is certainly home to a lot of the other type of tailgating. Two professional football teams, as well as Ohio State—one of the biggest college football programs in the country—play there. Unfortunately, the Buckeye State also has a problem with tailgating on the roads, as 22 out of every 10,000 drivers have received a citation for driving too closely. Ohio is also worse than the national average in both rate of seatbelt usage and the proportion of vehicle crashes involving multiple cars. It has the third-worst rate of seatbelt usage among states on this list, and that could be due in part to its lax safety laws. Only people riding in the front seat of a car in Ohio and children between the ages of eight and 15 are required to wear seatbelts.

One of four east coast states on the list, Connecticut actually measures up well in other metrics. It ranks better than the national average in seatbelt usage, multiple-vehicle crashes, and car crash fatalities. Its proportion of 7.7 vehicle-related deaths per 100,000 people is actually the third-best out of the states discussed. However, it’s also the state with the seventh-most tailgaters per 10,000 people, so not all is perfect.

Washington may be on the opposite side of the United States, but much like Connecticut, it performs better than the national average in every metric except tailgating. It is especially excellent when it comes to seatbelts. 94.8 percent of riders wear seatbelts, the fifth-highest figure in the country. This could be due in part to the hefty fines imposed for failing to strap in. Washingtonians have to pay $124 if caught not wearing a seatbelt. By comparison, Ohio—which as discussed above has weak seatbelt laws—fines offenders just $30, and police can only fine a driver if they have already been pulled over for another offense.

Virginia holds the fifth-worst rate of tailgaters among all 50 states, and also struggles to get drivers to buckle in, as its seatbelt usage rate is a full 4.6 percent less than the national average. However, Virginia also sees fewer multi-driver collisions than all but two of the other top 10 worst tailgating states, and holds a rate of vehicle-related fatalities that is 13 percent less than the national mean.

Utah, which like Colorado is famous for its bevy of beautiful ski resorts and hiking destinations, is nonetheless even worse than its alpine neighbor when it comes to driving too closely to neighboring cars. Its proportion of tailgaters per 10,000 is nearly two times that of Colorado’s, though Utah does fare better in the other three metrics than Colorado does. As well, despite its struggles with tailgating, Utah does a good job limiting alcohol-related driving incidents. It has the 14th fewest alcohol-related driving deaths out of all the 50 states.

The Cornhusker state, which slots in at number three, doesn’t just have a tailgating problem. Nebraska actually measures below average in seatbelt usage and vehicle-related fatalities as well. Driving without a seatbelt in Nebraska appears to be especially dangerous. In 2017, 60 percent of fatally injured drivers were determined to have not been wearing their seatbelts. That mark ranks fifth-highest out of the 50 states.

This top-10 list is home to the state with the lowest seatbelt usage rate (New Hampshire), and the state with the highest rate of seatbelt usage in Georgia. The stellar record of strapping in doesn’t seem to help with tailgating though, as Georgia holds the second worst proportion of drivers cited for tailgating. Additionally, the southernmost state on this list has a fatality rate that’s tied for 16th worst nationally.

No state has as big of a problem with following too closely as Idaho does. Their rate of drivers who have been cited for tailgating, 76 out of every 10,000, is nearly double that of Georgia, the second-worst state, and exactly double that of Nebraska, the number three state on the list. Idaho has more than one problem with driving safely, though. It’s seatbelt usage percentage is second-worst on this list, and ranks in the bottom eight nationally.